On Saturday, I returned from a week at Myrtle Beach, South Carolina, the one place I feel comfortable walking around without my shirt.

Despite being an Alabama boy, I suffer from Pale Pasty Syndrome. My upper body is a fish-belly-white mass covered with patches of wiry, black fur. It’s not a pretty sight … unless you’re a female Bigfoot.

However, on Myrtle Beach, I can blend in with the other Pale-Pasties and not scare the children, who are used to their Dads’ pale pastiness.

Imagine a mother cannibal preparing a recipe that calls for One Pale Pasty Man.

She yells to her cannibal husband, who’s watching the Cooking Channel’s MAN FIRE FOOD on his black-and-white TV.

“Honey, can you run down to Limbs and Livers Grocery and pick up a Lionel?”

Cannibal husband replies, “Yes, dear. What’s the special occasion? We only eat a Lionel when you’re in the mood … ohhhh.”

Cannibal wife winks and bats her eyelashes, while cannibal husband rushes to the store on his bicycle made of coconuts.

At least, I’m the catalyst for an upcoming night of cannibal love, which is the title of at least one movie and two songs, by the way.

While at Myrtle Beach, I received a tan courtesy of the sun. I assume it will be a tan after I transform from the red lobster I am now back into a human once again.

I traveled to the beach the week before Shark Week for safety reasons. I’m not a fan of Shark Week because I feel like it places undue pressure on sharks to play the part of the man-eater.

We’re basically forcing sharks to say, “Oh well, I wasn’t going to bite anybody today, but it’s Shark Week, so I guess I better take a nibble to conform to humanity’s expectations of my behavior. I can’t disappoint the fans.”

While I didn’t see any live sharks, I did simulate a realistic hammerhead attack inside one of the tourist shops along King’s Highway. 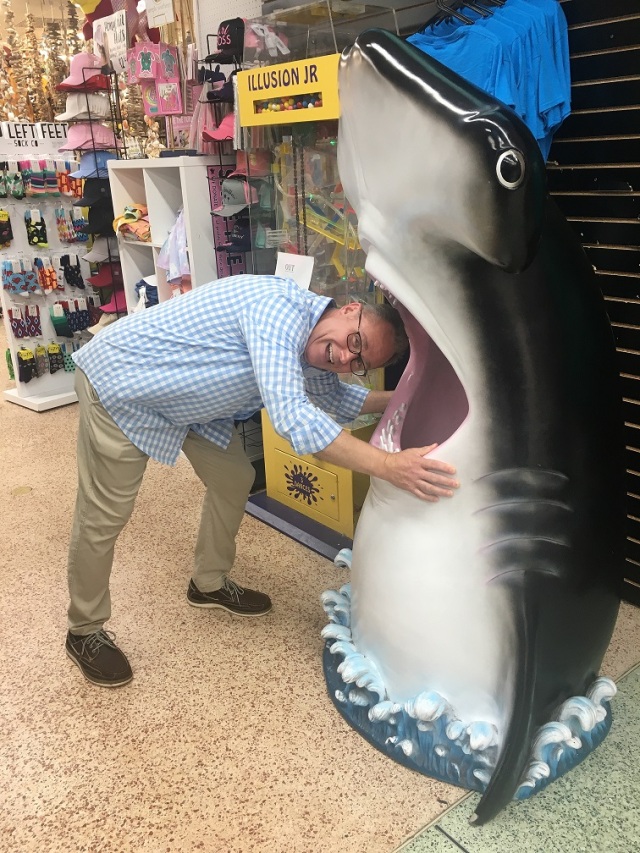 I didn’t see any jellyfish either, but I forgot to bring peanut butter, so it wasn’t a big deal.

Now, it’s time to get back to penning novels for whoever will read them; short stories for whatever anthologies will accept them; and reviews and interviews for HorrorAddicts.net, which is an awesome website I’m hoping to help with content.

Until next time, keep on writing!

2 thoughts on “Horror at the Beach! (or Attack of Pale Pasty Man!)”