I called him Dad.

It was the worst day of my life, but I got to say goodbye to him as he was surrounded by all his loved ones.

Gone but never forgotten, Dad still inspires me every day. 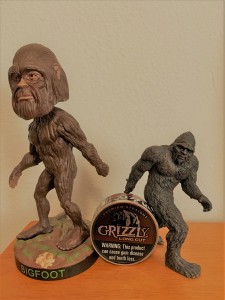 I keep his last can of Grizzly Long Cut Straight snuff at my writing desk flanked by a couple of my favorite Bigfoot figurines.

As an author, I go by Lionel Ray Green not because I’m pretentious. Ray is also my dad’s middle name, and it’s a small way I can honor his memory and show how proud I am to be his son.

Anyway, I wrote this poem titled “Flying High” for Dad. I tried to pay a singer/songwriter from Europe some money to turn my poem into a song, but the lyrics were too meaningful and personal for someone who didn’t know Dad to do it justice, so he turned the job down after trying for a couple of weeks. It was probably for the best.

I hope you enjoy the poem. If nothing else, you’ll have the chance to listen to Narvel Felts sing “Reconsider Me” at the end. Dad could never quite hit that high note. You’ll know what note I’m talking about if you listen to it.

By the way, Dad introduced me to the music of Narvel as a boy, and I’ve enjoyed his music ever since.

Maybe Dad is hitting that high note in Heaven today.

His grandkids called him Papa; he loved them all so much.

I called my father Dad until the day that he died.

And if love is like an angel then Dad is flying high.

The greatest gift he gave me, now I understand.

He let me be a boy before I was a man.

I never even realized he was my biggest fan.

He’s the reason now that I do the best I can.

He taught me how to fish when I was just a kid.

He taught me nearly everything that I ever did.

He grilled the best T-bone steaks that I ever ate.

He always made sure I had food upon my plate.

He served in the Air Force, a policeman’s son.

He left for work most every day at the break of dawn.

He loved my sweet mom Sharleen more than anyone.

If you disrespected her, boy, you’d better run.

He liked George Jones and Merle and Narvel Felts.

He’d sing “Reconsider Me” until your ears would melt.

Looking back, I think he hit all the notes just right.

And I would give anything to hear it just one more time.

I will never forget that dark day in mid-July.

I’m so glad I got the chance to tell him goodbye.

I’d never seen such courage in the face of death.

I’m grateful I got to hold his hand until his final breath.

I called my father Dad until the day that he died.

And if love is like an angel then Dad is flying high.