(Editor’s note: DOUBLE FEATURE is a column where I read at least two horror books per month in 2020 and review them for my website.)

Reception is the impressive debut novel by Kenzie Jennings released in March 2019. I read Reception because the cover featured a quote from one of my favorite authors, Jeff Strand. “An outstanding horror debut, grisly and nasty with a vicious satirical bite.” Strand isn’t the only one who enjoyed the book. Reception is a 2020 Splatterpunk Awards nominee for Best Novel and boasts a superb rating of 4.8 stars out of 5 on Amazon. Subversive and fun, Reception is told in the first person by Ansley, an anxiety-laden woman fresh out of rehab and suffering from medication withdrawals. However, Ansley is determined to be there for her younger sister Shay’s wedding at an isolated resort in the middle of nowhere. With Ansley as an unreliable narrator, Jennings deftly uses family conflict to lure the reader into the familiar drama of a wedding where tensions normally run high. But nothing’s normal about this wedding. At the halfway point of the book, Ansley looks out the window in the middle of her reception speech and sees the unimaginable. It’s one of those perfectly written scenes in horror fiction. Reception is like a delicious three-course meal. Jennings tempts your taste buds with a spicy first-chapter appetizer, then serves a slow-burn main course before finishing with a bold dessert slathered in gore and suspense. 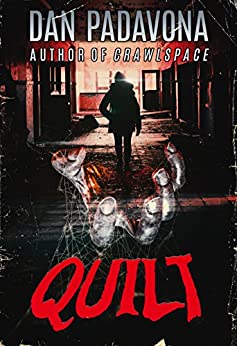 Quilt is an intense horror novella that author Dan Padavona said “is easily the darkest story I ever wrote.” After reading Quilt, I wondered if Padavona meant to write a cautionary tale warning school teachers about the inherent dangers of becoming too emotionally invested in their students’ lives. But I digress. Released in February 2018, Quilt introduces the Halloween Man, an urban legend/serial killer haunting Jasmine Heights, a neighborhood on the wrong side of town. When Jadyn, a promising student from the neighborhood, stops coming to school, his teacher Annelise grows concerned. Despite warnings from the principal and her friend, Annelise decides to venture into Jasmine Heights and discover the reason for Jadyn’s absence. Padavona’s prose is tight as he skillfully builds dread and suspense under the shadow of the Halloween Man’s mythic presence. The foreboding tone and gritty setting reminded me of the 1992 film Candyman starring Tony Todd. While Annelise makes the wrong decision to enter Jasmine Heights alone, you forgive her naiveté because she does it for the right reason. But the road to hell is paved with good intentions. Annelise is a light in the blackness of Jadyn’s world, but the Halloween Man lurks ever in the shadows, and he extinguishes light. Padavona injects an added layer of emotional depth to Annelise’s story, most notably in the last conversation she has with her ex-boyfriend. Oh, and the final two sentences of the story are absolutely perfect. Teachers (the good ones) will understand. Unflinching horror in the purest sense, Quilt is a direct dive into darkness without a parachute or a soft place to land.

April’s DOUBLE FEATURE | Allison & The House by the Cemetery