(Editor’s note: DOUBLE FEATURE is a column where I read at least two horror books per month in 2020 and review them for my website.)

March’s DOUBLE FEATURE: True Crime by Samantha Kolesnik and The F***ing Zombie Apocalypse by Bryan Smith. Both are published by Grindhouse Press. 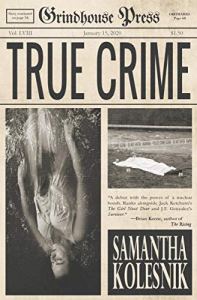 When World Horror Grandmaster Brian Keene says a book “ranks alongside Jack Ketchum’s The Girl Next Door and J.F. Gonzalez’s Survivor,” you take note. After reading it, I agree True Crime is worthy of Keene’s praise.

Samantha Kolesnik writes a tragic character study told from the point of view of a girl named Suzy, whose mother sexually abused her. Tired of the abuse, Suzy kills her mother and embarks on a low-key murder spree with her big brother Lim. Suzy’s soulless protector, Lim is physically imposing but mentally challenged and dangerous.

What elevates True Crime is Kolesnik’s bold attempt to show how childhood trauma changes the emotional mindset of the victim. Suzy’s worldview is forever skewed, and her fragile psyche seems beyond healing.

True Crime is a disturbing read. Suzy’s keen observations are uncomfortably pinpoint when, for example, she describes the predatorial and perverted male gazes aimed in her direction.

While reading True Crime, the classic 1937 novella Of Mice and Men sprang to mind. Kolesnik’s descriptive writing reminds me of Steinbeck’s simple but precise prose. Their writing strips down human behavior to the uncomfortable truth.

The most telling moment of True Crime for me was when Suzy asks her brother if there’s an afterlife.

“How the hell am I supposed to know?” he answers.

“I don’t want to see her again,” she responds.

In one seemingly innocuous exchange, Suzy powerfully sums up a victim’s state of mind regarding her abuser. Suzy never wants to see her mother again even in the afterlife. The damage is irreparable. Her mother destroyed or tainted any memory of happiness, not only for Suzy’s childhood but for the rest of her life.

True Crime is like a dark ride down a lonely country road in the dead of night when there’s no chance of turning back or seeing the light again. 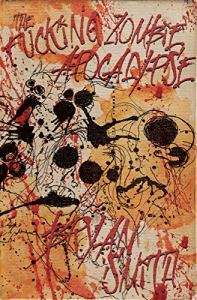 Bryan Smith is one of today’s best authors of extreme horror with gritty, ultraviolent novels like Depraved and The Killing Kind cementing his exalted place in the genre. With The F***ing Zombie Apocalypse, Smith steps into more surreal territory.

The plot is absurdist. A guy named Phil wakes up with an epic hangover after breaking up with his girlfriend Crazy Sue. However, Sue is holding Phil’s pet hamster hostage and is threatening to kill it if Phil does not return to her in an hour. So, Phil heads out to rescue his hamster, but as luck would have it, a full-blown zombie apocalypse has started.

Phil must shake the cobwebs of his drunk-addled brain to battle through an undead horde and save his hamster. That’s the normal part of the story. Phil’s quest takes a couple of unexpected and outlandish detours. I didn’t know if I was reading an alcoholic’s fever dream or a cautionary tale about dancing with the devil.

Either way, The F***ing Zombie Apocalypse is a fun albeit bizarre mindscrew of a story as Smith carries us along on a wild ride aboard the crazy train of Phil’s point of view.

April’s DOUBLE FEATURE: Allison by Jeff Strand and The House by the Cemetery by John Everson.