One of my favorite horror authors, Jeff Strand, released a filthy comedic thriller titled Bang Up on October 21st.

I’m sad to report my 5-star Amazon review of the hilarious novella made Strand “cringe.”

That’s one of the tidbits I learned in my exclusive 5-question email interview with Strand.

A couple of other nuggets I learned: Strand doesn’t react overtly when writing his own comedy scenes or, in the case of Bang Up, the sex scenes.

“I don’t laugh out loud at my own stuff,” Strand wrote. “Nor did I say ‘Oooohhhh, yeah, that’s soooooo hawt!’ while I was writing the sex scenes, which will be a relief to many people reading this interview.”

Bang Up‘s plot is about a husband named Ralph who pays a stranger named Kirk to have sex with his beautiful wife Julie. The catch is the husband requests the stranger perform badly in bed.

Then away we go on a zany ride filled with sex and sock puppets brought to us by Jeff Strand, a Bram Stoker Award-nominated and Splatterpunk Award-winning horror author.

In my Amazon review, I described Bang Up as “an X-rated film with a ‘Three’s Company’ plot,” because for some reason I could see Mr. Roper misinterpreting Mrs. Roper’s excessive amount of time on the computer and thinking up a plan like Ralph’s.

Strand seemed to disagree with my description.

“I have to admit that I cringe a bit at the ‘Three’s Company’ comparison,” Strand wrote. “The book is definitely a farce, but it’s not based on wacky misunderstandings.”

True. Bang Up is actually based on just one major and not-so-whacky misunderstanding. But it’s a doozie.

The bottom line: Bang Up is funny as hell.

So, while I deal with the emotions of making one of my literary horror heroes cringe, enjoy the rest of my interview with Strand.

LIONEL: After already releasing two books with dark plots in 2018, you lightened the mood with the comedy-thriller Bang Up? Was that your strategy for 2018 (horror-dark thriller-comedy) or do the stories dictate your release schedule?

JEFF STRAND: I’m not organized enough to have a full-year release strategy. Sometimes I know a book or two ahead, and sometimes I’ll finish a novel and think “Okay, so, uh, what’s next?” I didn’t know until after Sick House was finished that I’d be writing Bring Her Back. How You Ruined My Life, a goofy Young Adult comedy, was published between those two, but I’d written that before both of them, and there’s almost no crossover in audience between my YA books and my adult books.

I had two of my darkest novels back to back. And I didn’t want it to be “Welcome to the nihilistic world of Jeff Strand!” So I felt like writing something much lighter and sillier, and decided to see what would happen from a sales perspective if I sexed things up! It’s fun to take a left turn every once in a while and deliver something my audience wasn’t expecting, but the novel I’m writing now is a return to the horror/comedy I’m known for.

LIONEL: What TV sitcoms or comedy films do you like and do any influence your writing?

JEFF STRAND: I haven’t watched many recent sitcoms — the ones I loved (The Office, Parks and Recreation, 30 Rock) have all ended. My TV comedy viewing is stuff like The Daily Show, Full Frontal, the “Closer Look” segments from Late Night with Seth Meyers — mostly political satire. My film/TV viewing that influenced me goes much further back: Monty Python, the Zucker Brothers, craziness like that.

LIONEL: “You want to pay me to sleep with your wife?” What an awesome first line for a book. Where did that come from?

JEFF STRAND: I don’t remember the origin of this line. It’s an idea I had several years ago — a husband hires another guy to sleep with his wife, with the instructions that he do it badly so that the husband looks good by comparison — and never used. The payoff required an extremely graphic and lengthy (but very funny) sex scene, and I guess until now I wasn’t looking to add a smut novel to my oeuvre!

JEFF STRAND: 51-49, maybe? If you look at my last ten novels, five are comedies, four are horror, and we’ll call Cyclops Road a fantasy/adventure. But then my collection Everything Has Teeth skews more to horror, while my novella An Apocalypse of Our Own skews more to comedy. So it’s a pretty even split. That said, most of my readers are horror fans, and I attend horror conventions instead of comedy conventions, and I’m friends with lots and lots of horror authors but very few humorists. So we’ll go with “horror author who writes comedy.”

LIONEL: What’s the last thing that made you laugh out loud? 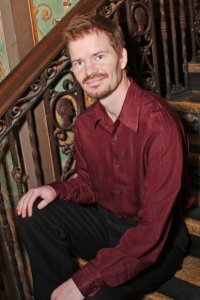 You can visit the official Jeff Strand website by clicking here.

You can purchase his new novella Bang Up on Amazon by clicking here.

Finally, check out my other 2018 interview with Strand by clicking here.