The eighth CD out of the bag 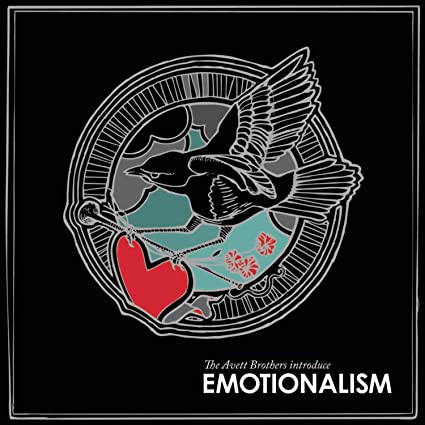 The Avett Brothers’ Emotionalism is an acoustic, banjo-infused exploration of the heart. Released in 2007,  Emotionalism is the rare album that dares to examine love and hate, pain and regret, and the conflicting emotions in relationships with a blend of raw spontaneity and soul-baring introspection. Mix in the gorgeous harmonies and a charming naiveté, you have one of the best folk-country albums on the planet. The first verse of the album hooked me: “She’s fighting with the sky/She thinks she can/Livin’ within a lie/She thinks she can.” Emotionalism is steeped in meaningful, thought-provoking lyrics that are sincere and relatable. Highlights include the girl who’s never satisfied in “Die Die Die”; the man begging for a second chance in “Shame; the man running from past mistakes in “The Weight of Lies”; the tender and enchanting allegory of “The Ballad of Love and Hate”; the unrequited love of “I Would Be Sad”; and the breezy island flavor of “Pretty Girl from San Diego,” a bouncy rhythm in contrast to the narrator’s conflicted feelings for a woman.

My favorite song is “Will You Return,” a banjo-blasted whirlwind of spirited harmonies and urgency. The narrator describes three encounters with a girl, each ending in goodbye but with the hope of seeing her again. He resists her advances, perhaps because her unresolved issues would make a relationship too difficult. Maybe she needs to love herself first. Don’t we all?

Chapter Three: Which CD will it be?

Chapter Four: Which CD will it be?

Chapter Five: Which CD will it be?

Chapter Six: Which CD will it be?

Chapter Seven: Which CD Will It Be?

3 thoughts on “Chapter Eight: Which CD Will It Be?”