I follow several professional book reviewers in the horror genre because I learn a lot from their passionate and pinpoint critiques.

I also get a lot of recommendations for my towering to-be-read pile.

As I’ve scrolled my Twitter feed this summer, I’ve seen the hype for various horror novels, and some have received noticeably more fervid feedback than others.

The following five are the horror novels with the most heartfelt hype of the summer from my Twitter feed (in my opinion).

The only restrictions I had for the list are 1) the books had to be released in 2018, and 2) I had to have not read them yet.

All five of these novels are in my TBR pile to be read sooner rather than later. Personally, I’m most excited about THE HOUSE BY THE CEMETERY by John Everson, an all-time favorite author of mine. The novel is slated for release in October. 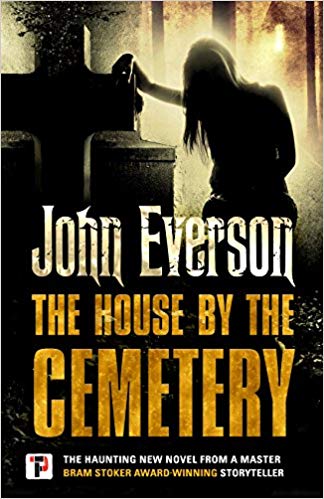 Without further ado, here’s my list in order of the books’ release dates. Click on the titles for the Amazon links.

Amazon description: New York audiobook narrator Peter Larson and his wife Hannah head to his hometown of Maple City to help Peter’s ailing father and to put a recent tragedy behind them. Though the small, Midwestern town seems the idyllic place to start afresh, Peter and Hannah will soon learn that evil currents flow beneath its surface. They move into an old farmhouse on the outskirts of town—a house purchased by Peter’s father at auction and kept secret until now—and start to settle into their new life. But as Peter sets up his recording studio in a small basement room, disturbing things begin to occur—mysterious voices haunt audio tracks, malevolent shadows creep about the house. And when an insidious presence emerges from the woodwork, Peter must face old demons in order to save his family and himself.

Amazon description: The night uncovers all we wish not to see. A troubled man enters a dusky park before sunset. A young woman follows, hidden in shadow. Both have returned to the park to take back something the past has stolen from them, to make right six long years of suffering, and to find justice or perhaps redemption — or maybe they’ll settle for some old-fashioned revenge. But something evil is alive and awake in those woods, creatures that care nothing for human motivations. They’re driven by their own insatiable need: a ravenous, bottomless hunger. The campgrounds are full tonight, and the creatures are starving. Before the night is over, they will feed.

Amazon teaser: These woods are dark and full of monsters. In 1991, hell was unleashed upon Saint Christopher’s Summer Camp for Kids. The killers left behind piles of bodies and rivers of blood. Some say a family of inbred cannibals was responsible. A masked psychopath with a butcher’s knife is another popular theory. Some still believe a camp counselor lost his mind and went crazy on everyone with an axe. But there’s also the mysterious, derelict factory that sits nearby, atop Kill Hill. A place where urban legends are manufactured, the grotesque and bizarre. Twenty-five years later, the factory on Kill Hill is still said to be operational, but no one can get near it. It’s safely guarded along with the secrets within. But there are a few loose strings and hitman Frank Harmon has been sent to tie them up. His kill list is short, but the night is long and full of unspeakable horrors. With the help of a few college students on an impromptu camping adventure, Frank must contain the mess at Kill Hill before it spreads to the neighboring towns. Before it infects the entire country. Before it invades the entire world.

Amazon description: When neurosurgeon Jake Breaker operates, he knows he’s handling more than a patient’s delicate brain tissue — he’s altering their seat of consciousness, their golden vault of memory. And memory, Jake knows well, can be a tricky thing. When growing up in 1980s Niagara Falls, a.k.a. Cataract City — a seedy but magical, slightly haunted place —  one of Jake’s closest confidantes was his uncle Calvin, a sweet but eccentric misfit enamored of occult artifacts and outlandish conspiracy theories. The summer Jake turned twelve, Calvin invited him to join the “Saturday Night Ghost Club” —  a seemingly light-hearted project to investigate some of Cataract City’s more macabre urban myths. Over the course of that life-altering summer, Jake not only fell in love and began to imagine his future, he slowly, painfully came to realize that his uncle’s preoccupation with chilling legends sprang from something buried so deep in his past that Calvin himself was unaware of it.

Amazon description: Rumor has it that the abandoned house by the cemetery is haunted by the ghost of a witch. But rumors won’t stop carpenter Mike Kostner from rehabbing the place as a haunted house attraction. Soon he’ll learn that fresh wood and nails can’t keep decades of rumors down. There are noises in the walls, and fresh blood on the floor: secrets that would be better not to discover. And behind the rumors is a real ghost who will do whatever it takes to ensure the house reopens. She needs people to fill her house on Halloween. There’s a dark, horrible ritual to fulfill. Because while the witch may have been dead … she doesn’t intend to stay that way.

Amazon description: Will Burgess is used to hard knocks. Abandoned by his father, son of a drug-addicted mother, and charged with raising his six-year-old sister, Will has far more to worry about than most high school freshmen. To make matters worse, Mia Samuels, the girl of Will’s dreams, is dating his worst enemy, the most sadistic upperclassman at Shadeland High. Will’s troubles, however, are just beginning. Because one of the nation’s most notorious criminals — the Moonlight Killer — has escaped from prison and is headed straight toward Will’s hometown. And something else is lurking in Savage Hollow, the forest surrounding Will’s rundown house. Something ancient and infinitely evil. When the worst storm of the decade descends on Shadeland, Will and his friends must confront unfathomable horrors. Everyone Will loves — his mother, his little sister, Mia, and his friends — will be threatened. And very few of them will escape with their lives.

Note: Even though it was published in 2016, CHILDREN OF THE DARK is on the list because I’ve seen so many positive comments about it this year. World Horror Grandmaster Brian Keene says on the cover:  “One of the best writers to come along in the last decade. Janz is one of my new favorites.”